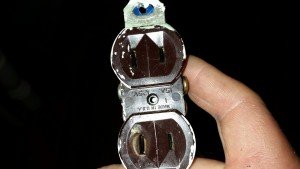 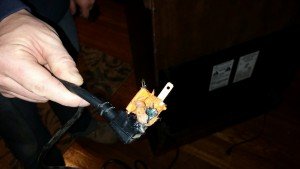 We were recently called to a house in Port Richmond after an electric space heater nearly caused a fire. Luckily the homeowner pulled the melting cord from the wall to prevent a much bigger problem. The outlet they were plugging the space heater into was an ungrounded two prong device. A cheater was being used to be able to plug in the three prong space heater. Multiple problems occurred in this situation. The two prong outlet was old and loose, the circuit was being overdrawn, and a cheater should never be used. If you have to use a space heater in your home be sure the circuit can handle the 1500 watts that most of these units require. The pictures show the damage. For all of your electrical needs contact your licensed electrician Lauterborn Electric.