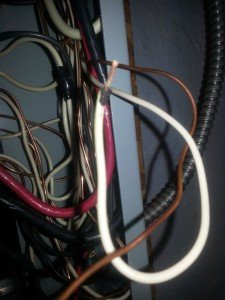 Lauterborn Electric was called out to the Tacony section of Philadelphia by a customer who had lost power to the kitchen and dining room lights. The customer found us on YELP and liked the positive reviews on Lauterborn Electric. Upon arriving we began trouble shooting and found the problem at the main electrical panel. The image shows the problem, the neutral wire was attached to the same set screw as the ground wire and became loose causing arcing to the point of failure. The black mark on the wire is from arching causing the wire to heat up and char.