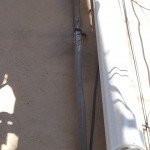 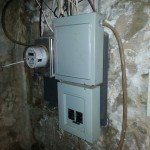 Lauterborn Electric recently installed a 200 amp service for a customer who found us on Yelp in the South Philly area.  The customer had called a couple months earlier about a problem with blinking lights and the smell of something burning near the panel.  When we arrived, we noticed that most of their breakers were double tapped meaning there were two wires on one breaker. We also noticed one of the double tapped breakers was charred and hot to the touch. We installed two twin breakers to remedy the issue, but recommended a new service and larger 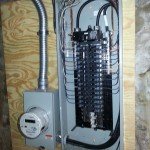 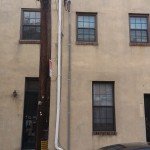 panel.  After consulting with the customer, we decided an upgrade to 200 amps would be the way to go to allow for future electrical projects. The images show the 100 amp service before our service call and a frayed and cracked outside cable which leads to water penetrating the electrical equipment.  They also show the two panels they had that were filled with breakers.  The after pictures show how Lauterborn Electric upgraded the service with PVC being used to protect the cable on the exterior and new 200 amp 40 circuit panel. Proper grounding and bonding were done to meet all electrical codes.  For all your electrical needs contact your licensed Philadelphia electrician Lauterborn Electric. Click images to enlarge.