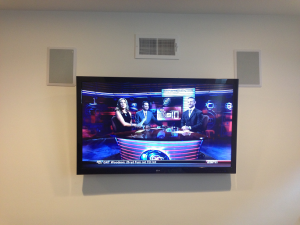 Lauterborn Electric was recently called to a property in Olde Kensington. The home owner was looking to have a TV mounted and some in wall surround sound speakers installed.  The picture shows the finished TV mounted and two of the six speakers that were installed.  All the wire used was rated for in wall use, the speakers and TV were wired to a receiver which then controls the speakers and what comes out of them.  Six speakers were installed to give out the best possible sound. Four speakers were in wall and the other two were ceiling speakers. The customer also bought a y audio splitter cable which gave them the ability to play thier IPod and/or cell phone music through the speakers.  Contact your licensed Philadelphia Electrician Lauterborn Electric for all your electrical needs.