We were called out to this property because they had lost power to their receptacles on their kitchen counter. When we opened up the boxes, we discovered this improper installation. 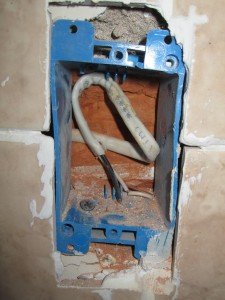 The image above depicts a wall box that was fabricated by the unknown installer leaving energized parts exposed behind the walls.

There were 3 receptacles on the counter and each box had one wire (Romex) going to it. The kitchen was not accessible from below and only one wire was going back to the panel.

After an evaluation by Lauterborn Electric, we concluded that a junction box must have been improperly installed under the floor with no access to it.